Farm to Fashion: Soil Samples and Designer Tea-Shirts, All in a (strange) Day’s Work 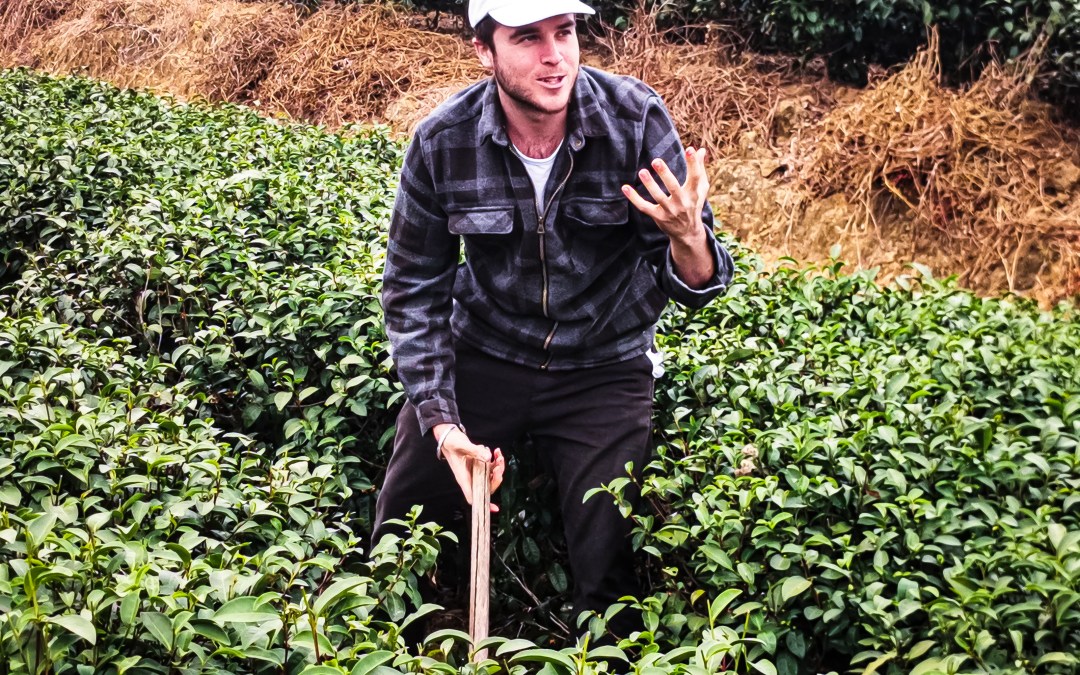 I had a very bizarre weekend, which within a 24-hour cycle, took me from pilfering through piles of dirt and cooking rodents to modeling for the fashion industry.

Wrapping up a long 2019 here, in the the final year of my tea science master’s program, I’m hurrying (scrambling, in fact) to finish data collection, so I can move on to thesis writing, graduation, and the ultimate attainment of a piece of paper, the one that aids in the attainment of more pieces of paper (diploma and dollars, respectively). In my current phase of research, I regularly visit organic tea farms to gather soil samples… which is an elegant way of telling you that I scoop dirt now as my full-time occupation.

Yes, my time since October has been largely spent traveling around rural China, scooping dirt, putting that dirt into germ-free plastic vials, and promptly freezing my dirt vials in -80 C liquid nitrogen.

On my most recent excursion, I arrive at the organic farm in typical fashion with my Ziploc bags, vials, and Styrofoam cooler, and say something that roughly translates into English as “hello there, may I please scoop a little of your dirt to freeze and take home with me in this here box of scalding cold nitrogen gas? I would be greatly obliged.”

I forgot to mention that in order to arrive at this farm in the first place, I woke up that day in Guangzhou around 6am, biked to the subway station, took the subway to the bullet train station, took the bullet train 500km northwest to a different province, and upon exiting the bullet train in the much less developed Province of Guangxi, haggled with unregistered cab drivers for a reasonable price to taxi me another 2+ hours from the train station to the organic tea farm that I had selected ahead of time for their top-notch world-class…… dirt.

Arriving at the farm having just completed this trek, I tiredly asked if I could conduct some soil sampling research. They were confused as to what possessed me to travel 6 hours to scoop some dirt and leave, but I explained my project in more detail, and the boss eventually shrugged and said, “Yeah, that seems alright… scoop away buddy. Scoop your little heart out.”

Good news for me. But before any scooping could commence, it was time to break bread, or rather, break rice.

I was informed that I was particularly fortunate on that day, for two of the local farmers had just that morning succeeded in trapping a wily wild rodent known as a ‘Zhushu,’ meaning ‘Bamboo Rat’, named for its bamboo-only diet. I had heard about the Zhushu from farmers in this region – small, plump, but strikingly swift, and usually successful in evading hunters due to their uncanny ability to flee underground faster than you can say “I do not want to eat bamboo rat today, but thank you.”

But, when you are a foreign guest in rural China, you eat what is served (and usually love it).

We break rice and sauté the wild rat, which to be quite honest was scrumptious. Like a succulent chunk of chicken, but gamier. We paired our entrée with a home-brewed rice-based spirit, whose floral aroma served to bring out the bamboo undertones in our savory seasonal zhushu…

My afternoon meal of grain liquor and rat meat was just the sustenance I needed to fuel my endeavors – scoop the dirt, freeze it, pack it, and eventually, run that looooong itinerary in reverse, arriving home safe and sound by midnight. Holy zhushu what a day.

Now, to return to the unsettling announcement that opened my story – I have only explained the first half, but what about the second, far more disturbing half? The half that to me is more alien in nature than rodent on the lunch menu… I speak of course about high fashion.

Allow me very briefly to rewind to one month prior, when my friend Jiaxin, who does event planning for a Chinese tea company (called Dayi/Taetea), said he was planning something with a clothing designer who recently put out a product line with a “new-age traditional Chinese” feel. The designer wanted to host an event combining her new clothing line with another “new-age traditional Chinese” specialty – premium Puer tea.  Jiaxin tells me this tea/fashion mashup project would comprise tea masters walking a runway wearing the new apparel, then sitting down at tea tables placed alongside the runway where they would then pour tea for guests of the event. He then asks if I want to be one of the tea fashion people…

I say, “Jiaxin, I am so confused by what I just heard, and I think your idea sounds absurd… but… I don’t have prior plans to scoop dirt that day… so yes count me in.”

Fast-forward again. Waking up, I brush the dirt off my shoes, the remaining zhushu fragrance out of my mouth, and head down to the part of town I never go to. The fancy part of Guangzhou, where happenings like fashion shows occur. Unlike the rural farm of yesterday, in today’s boujee borough of Guangzhou one might find an Apple store adjacent to a Starbucks behind a corpulent Caucasian man asking directions to the Westin in slow, loud American English.

At the event venue, I meet our hip group of amateur tea models (pictured below in a photo you don’t want to miss). We spend the afternoon rehearsing our movements and cues, and learning how to walk properly. I tried to inform them that my “improper” walk is in fact just called swagger and that it makes me cool… but they weren’t having it.

Next, makeup was applied to my face for the first time in history. The nice woman painting my forehead struck a puzzled look at one point, and I wondered if maybe she had encountered a trace of rat breath emanating from my direction… but, thankfully that was not the case. She said it was her first painting a Western face, and was pausing briefly to consider how best to navigate the new topography. I told her this was a first for both of us and we laughed.

We finished up, and I smacked the gloss around my lips just like I had smacked them after Zhushu lunch the day before. Showtime baby!!

All went as planned. We walked the walk, did the thing, poured the tea, and looked not too shabby… if I do say so myself. Importantly, the designer was happy. And I had fun.

An interesting day full of firsts. But for now… back to scooping (for science).