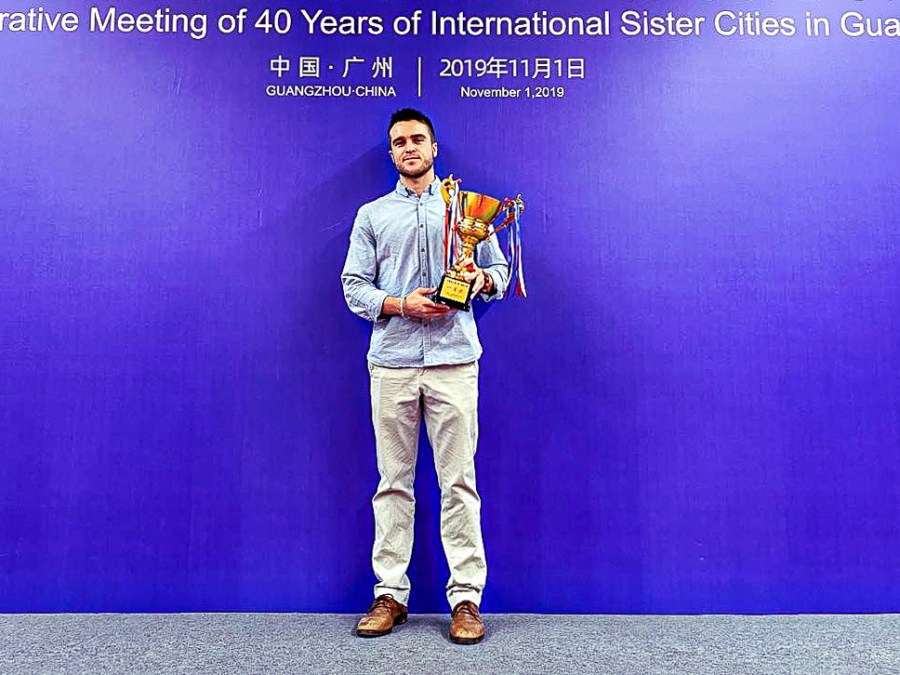 I write currently from my window seat on the bullet train to Guangzhou from Chaozhou county, Guangdong, where I spent the weekend processing Dancong Oolong tea. Mainly, I went in order to practice tea processing and learn as much as possible from the local tea master. Secondly, I wanted to try my hand at filming the process of Dancong Oolong tea production in a sort of mini-documentary fashion. Thirdly, I wanted to get out of the city and chill for a couple of days.

My grand plan was to go step by step through Dancong Oolong processing, filming as many details as possible, all the while physically carrying out the manual labor necessary for quality tea production, all the while taking mental notes to learn and improve my skills in tea processing, all the while… trying to chill. Yeah, it was a tall order.

Imagine fumbling around with camera settings, knowing there is only 20 seconds until you need to move swiftly and carefully into the next phase of tea processing. The head tea master (called the Shifu 师傅) is watching over your shoulder, grumbling in his local dialect that this selfie-taking white boy better get it together. 10 seconds now – I don’t know what resolution the camera is in, the focus mode, I’m on 8% battery because I was drinking rice liquor infused with wasps last night with Shifu and forgot to charge the dang battery (classic).

Times up. In a split second, I have to decide if I’m going to film this shot that I really want at the expense of optimal tea quality and the respect of Shifu, or toss aside my video project for the moment, not butcher this batch of tea, and maybe get invited back to the farm one day. Obviously, I choose not to get the shot.

Though frustrating, this blunder (and many others like it these couple of days) was the result of my unpreparedness and inexperience dealing with the numerous factors at hand in a one-man tea-processing, clip-filming, traditional technique-studying, waspy rice liquor-drinking operation.

Back on the bullet train, I’m disappointed about missing some important shots, but I’m still chipper because it was a good time and I learned from my mistakes.

Mainly I’m buzzing about something else. Unlike my hapless ventures with the medium of videography, my trials in tea art photography have been a surprising success.

In mid-October, I entered a Guangzhou city-wide photo contest for all expats living in the 13 million person Cantonese metropolis. Hosted by Guangzhou Daily Newspaper in commemoration of the Chinese Communist Party’s 70th anniversary, the competition was well funded, and included a number of legitimately nice prizes for first, second, and third place.

With my recently purchased Sony camera beginning to collect dust on the shelf, I said ahhhhhhhhhhhhh what the heck.

The very last day before the deadline (because at 26, I somehow remain crippled by procrastination), I dressed up in my Tang Zhuang (traditional Chinese clothing), and scaled up the rusty fire escape ladder onto the roof of my campus Horticulture building, with tripod, camera, and tea accoutrements hung around my neck, or tucked under my arm.

I set up my shot, and captured it using the ‘delay 10 seconds’ function, so I could scuttle back to my position and pose uncomfortably with my tea wares until I heard the ‘tick tick tick’ of the camera shutter. The process had to be reiterated maybe 20 times, leaving any passersby below who happened to look up utterly confused by the bearded foreigner scrambling around the roof of our 12-story campus building.

Once I had some photos that I deemed passable, I darted downstairs (deadline approaching), and played around with the editing software. I tried on some filters, cropped a little to the left, tilted the thing, photoshopped myself with nice big muscles… and submitted a few final images to Guangzhou Daily right in nick of time.

right in the nick.

Two weeks passed, and I had mostly forgotten about the competition, when I received a phone call from the paper telling me that I had won first place! Over 3,000 images submitted and somehow, I was chosen as the winner (look at me go!)

Tonight (back on the bullet train now), Guangzhou Daily Newspaper is hosting an award ceremony for the competition, which explains the little grin I’m wearing on my face gazing out the window at Chinese countryside blasting by at Mach speeds.

Moving from Chaozhou to Guangzhou, from my struggles in tea film to my modest taste of success in tea photography, I also travel internally, to a mind state that seeks to form my own artistic vision for capturing and sharing the beauty of tea culture.

In tea culture, the waters run deep. So much history over such vast swaths of land. But in these waters lay opportunity to document forms of art that astound and inspire.

Capturing the aesthetics of tea culture is proving to be more challenging than anticipated, in some aspects, but also more enjoyable than expected in others.

In other words, the capture of tea art, for me, is proving to be like an art form of its own – challenging, emotional, evasive… but on those rare occasions when you get it right, electrifying.

I hope to practice and improve in my newfound art form, and I look forward to feedback, advice and critique from those who track my progress along the way.

In case you doubted me

K you’re Tom Hanks in Castaway - You and Wilson get ONE major tea type to sip on until… ever. WHAT’s it gonna be?!? ☝️🌱🍵☕️⁉️
Green tea!! 🌱🍵it’s is an awesome superfood shown many times to provide the body with all types of health benefits. Interestingly, it seems that many of the health benefits provided by Green Tea may in fact come from a more balanced and beneficial GUT MICROBIOME created through regular Green Tea consumption. This reel gives a glimpse at the idea of tea consumption offering human health benefits THROUGH alterations to the gut microbiome. #greentealover #healthbenefit #matchagreentea #matchalover #matchatea #greenteabenefits #matchaaddict #tealoversclub #gutmicrobiota #gutmicrobiome #microbiomehealth #microbiomediet #antioxidantrich #greentealover #healthbenefitsoftea #greenteapowder #greentealovers #greenteaaddict #greenteaholic #greentealatte #greenteamatcha #greenteadetox #greenteaextract #tealover☕️ #tealoversunite #drinkteadogood #teatime🍵 #teatime☕️ #茶道 #健康茶
MATCHA 🍵 has been shown in HUMAN trials to reduce stress levels IF (and only if) there were high enough levels of stress-reducing tea amino acids (L-theanine + L-arginine) relative to tea catechins and caffeine, a ratio supported by tea plant SHADING prior to harvest (i.e. proper Matcha cultivation)(research linked below). This means that drinking high-quality Matcha literally makes you less stressed out 🌱🍵🤤
Chapter 3 on TEA PROCESSING is live !! (Link in bio)🌱💚🍵👀 Check it OOT and let me know how the H*LL it all works!! #tea #teaprocessing #tealearning #teaartisan #greentea #blacktea #oolongtea #whitetea #darktea #yellowtea #puerhtea #puertea #teatypes #wulongtea #maketea #drinktea #tealover #teatime #teamanufacturing #teagardens #teafamily #tearolling #teaaddict #teaproduction #camelliasinensis #matcha #organictea #茶 #茶叶
New Tea Science video just dropped! We are exploring how tea researchers are helping farmers to overcome the challenges presented by climate change WITHOUT the use of genetic modification. If you love tea and care about climate change THIS IS FOR YOU. Comment here or on YT to let me know what you think! Thanks J (Video linked above and in bio).
Get ready to INCINERATE that Like button and THROAT CHOP that Subscribe button because we got an all NEW PUER Tea Science video discussing Puer (Pu-erh) Tea CHEMICAL composition and beneficial EFFECTS of Puer Tea compounds on CARDIOVASCULAR HEALTH 🤩😤🤠🥵🌱☕️🍵🩸🖤❤️💚📈💌🧧 The video is JUICED up with science-centered convo regarding Puer Tea PROCESSING, PHYTONUTRIENTS, and impacts on BLOOD LIPID METRICS 😩😤🩸🩸❤️🍵🖤☕️💚🥴🤮 Check it out and SHARE with PUER-loving AND/OR ABOVE-AVERAGE LDL CHOLESTEROL-having friends… since all good friends know each other’s LDL particle count ❤️🩸☕️ (link to video in bio) @mihailomir #HABIB #habibi #puer #puerh #puertea #puerhtea #puerhaddict #puerhcha #puerhcake #darktea #organictea #organicteas #teaprocessing #healthtea #healthybeverage #healthbenefits #polyphenols #polyphenol #caffeinedaily #caffeinefix #caffeineaddict #oolongtea #blacktea #whitetea #umami #sweetandsavory #foodscience #healthybeverage #teascience #flavanoids
Loading Comments...